I traipsed down the street, like the Pied Piper. Well, maybe “traipsed” is a bit strong—but I did have my violin and people did come closer as I played.

I’d gone to a music festival with a dear friend. Some say he makes suits for a living, some say he works for the CIA…all I know is that he placated me that day—and it was awesome.  He smiled as I pulled out my fiddle.

“Will you walk up Main with me?”

“Sure!” he said because it’s a rare person who says ‘no’ to someone with cancer.

I planned to jump in with every band we passed—what was the worst that could happen?

It’s just that cancer has robbed me of a lot of dreams. I’ve opened for some pretty big bands: Shanandoah… Cracker… Some obscure Christian bands you’ve probably heard hit songs from. I’ve played for thousands—where my fingers danced under the brightest colored lights and my heart beat faster as each fiddle solo approached. Crowds cheered, people sang along—and almost everyone danced…even me.

But I had to stop playing gigs because I can’t stand for long anymore. I don’t even have the stamina to sit for more than a few hours. I can’t drive far to reach an audience. And lately, even hearing some old songs on the radio causes a sadness in my heart that I can’t quite explain.

So, my friend—the unconfirmed CIA legend—helped me “traipse” up Main. The first band didn’t seem enthused to see me, so I played quietly as we skirted by. I tried fighting the sadness.

Maybe my time with music had passed…just like my life is passing. Those glorious musical moments were gone.

Then, as we stood in an audience surrounding another band, the bassist looked out and smiled. “Hey, Blue!” He said, pointing to my hair.

Was the bassist of Rail City Jazz seriously pointing to me?

So, I excitedly went on stage, and those Samaritans gave me a solo. I could’ve cried as we played because they had no idea what kind thing they’d just done for someone who’d been losing hope….

It wasn’t until a couple of weeks later that I checked their Facebook page.

“Friends,” their latest post read, “it saddens us to announce that Brady Meline, Phillip's wife, died on Sunday after many years of suffering.” I read the words and nearly dropped my coffee. I frantically found her obituary and discovered that she too had battled stage 4 cancer!

I shut down my computer and stared out the window, stunned that they’d just helped a stranger with cancer, right before losing someone to the same dreadful disease. 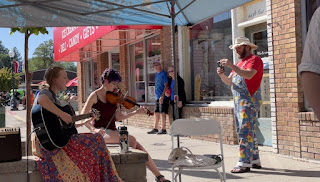 Posted by Crazy Life of a Writing Mom at 5:54 PM