Only one of our cars is running. Mike has spent several days on the ground, in the snow, just trying to fix a couple of our cars. “You can come work in my garage,” a neighbor said.

“That’s all right.” Mike smiled, a perpetual optimist. “But if you have a lift…?”

The neighbor shook his head.

I feel so bad for Mike. First he married a single mom with four kids, then his wife got terminal cancer, and then all of their cars slowly died…no matter how hard he worked on them in the cold—BUT he miraculously didn’t get frostbite. The End.

This car conundrum isn’t a big deal though since I work from home. Well, it didn’t seem like a big deal until today. Mike now works from 3 p.m. to 3 a.m. on alternating days of the week, and Indy had a mandatory school performance. (Don’t ya just love when kids tell you the day of the performance that they have to be there?)

Sky let me borrow her car—thank God! But that only solved half the battle. “Indy, I’ll have to wait in the car. There are always a million cars. We’ve had to park blocks and blocks away, and you know  I can’t walk that far.”

“It doesn’t work in the snow.”

I’d need her to pull me on a sled.

“Mama,” my baby girl’s eyes welled with tears. “You won’t be able to hear me in the car.”

Sometimes life is so unbearably hard. I don’t want to have cancer. I don’t want poor Mike to slave away always working even when he’s off of work. But God knows I’m doing everything I can. I’m still working part time even though doctors said they’re shocked I didn’t quit my job ages ago. But I’ve even worked from hospital rooms right after surgeries. I’ve done my very best—because I’ve seen Mike and our kids do the same.

So, I promised to walk inside to see Indy—no matter how much (not to be dramatic) it might feel like trekking behind a covered wagon across the plains without shoes.

She chirped as we drove along, so excited about the performance. “I prayed that God would help us. It’ll all work out.”

Sure, I thought. I don’t mean to be a jerk, but although I love God, I don’t think He always ensures that life will be fair. In fact, life is guaranteed to suck some of the time.

We got closer, and numerous cars filled the streets. My heart started to shatter. I’d be lucky to make it to the front entrance at all. But I didn’t want Indy to be late OR to see me struggling just to get inside, so I thought of something. “I don’t want you to get wet. I’ll drop you off at front. Okay?”

We waited behind a bunch of cars, and right when we got closer to the front, someone pulled out of a spot RIGHT by the main doors. It must’ve been the best spot ever! My eyes widened, and I waited in case someone else needed it in front of us, but no one swooped in to take it.

So, I parallel parked and could hardly believe our luck.

“I can’t believe that just happened.”

“I know God doesn’t answer all of our prayers. Only He knows why…,” Indy said. She smiled at me, the streetlights illuminating her already ecstatic face. “Maybe God knew YOU really needed a break.”

The performance went great—Indy always does an unforgettably spunky job, AND she did give me something to think about. After my oldest son died, I stopped praying as much because I figured God would do what He needs to; He knows better than I do anyway.

Tonight, that might’ve just seemed like a parking spot to most people, but it was a lot more to me and Indy. Maybe God does reach down and give us a break when we need it the most. That’s what tonight felt like anyway.

I took this picture right after the spinal team removed a tumor that had eaten my whole L3 vertebrae. You know I love editing (and getting a paycheck) when I’m even doing it from a hospital room. 😂 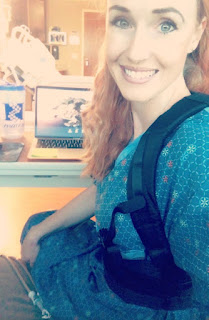 If you’re having a hard time, I hope you’ll “catch a break” soon. They sure do help!