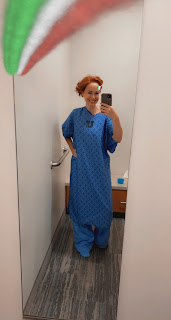 “It’s kind of like Make-A-Wish, and you’ve been selected.”

I paused, a bit dumbfounded. I’ve been nominated for a few things since my cancer diagnosis, but this is the first time I’d actually “been selected.”

“Think of something you want to do with your family, something really big.”

My first thought went to Italy. My biggest bucket list item has always been to visit Italy— especially where my mom‘s family is from in Calabria. Going there with Mike and the kids, well…that would be a dream come true. But I didn’t want to ask for something so huge, and instead I said, “Maybe they could pay for us to go to Lava Hot Springs. The tickets are under $20 a person, and we absolutely love going there.” I figured, this was something fun but not extravagant.

“Are you kidding?” the woman said on the phone. “That’s not nearly big enough. You need to think of something big.”

So…I thought about it for the next couple of days, and when I called her back I had thought of something enormous. It was beyond going to Lava Hot Springs. Beyond going to Italy. Beyond landing on the moon. “I want to meet Oprah,” I said.

She broke out laughing and then tried to calm herself. “We can’t help you meet Oprah, Elisa,” she said.

And I immediately felt my skin heat to the temperature of total embarrassment.

“Go look at our website and see what we can do. Go look at what other people have asked for.”

So I went and saw that they built ramps to go into people’s houses. They’ve paid for big vacations to different states. They’ve bought people cars.

But I still felt mortified, so I called one of my best friends. “I feel utterly stupid.”

My friend laughed and laughed. “You have to admit. It IS a little funny.”

This friend is an absolutely incredible person. They’re quite well off, but it hasn’t ruined them—they’re so down to earth and kind to everyone. I remember talking with them about wealth once. “It won’t bring the people we love back,” my friend said. They’ve had some family members who died of cancer. And maybe that’s one of the reasons we’ve gotten closer in the past two years. I guess they just really understand what I’m going through.

“So what are you gonna do now?”my friend asked.

“Well, I’ve decided to call the lady so I can tell her to give the money to someone else—maybe a kid or something. I just think there’s someone else who could use it more than I can.”

Months passed, and I didn’t hear from that organization again. I hoped the representative found someone who could think of an appropriate wish, something that would really change their lives. “I wonder what THEY picked,” I told my friend one day, and they said it was interesting I brought that up because they had a surprise for me.

“It’s not just me,” they explained. “I’ve gotten together with a few other people about this. Don’t get too excited because we’re just covering the plane tickets. BUT…”

I held my breath.

“We’re buying you and your family tickets to go to Italy.”

I nearly dropped my phone. “What?! I stared ahead blankly. “You can’t do that. That is so much money. And plus, the doctor said I might be getting better. Some of the cancer in my body is starting to die.”

Silence. Then finally, “Elisa, I just read your book. You remember the man you met—the one who said he got better for a few years, but the cancer came back? He said his advice to you would be to live to the fullest if you ever had the chance because you never know when it might come back.”

“I have so many family members who died of cancer. They didn’t get to live out their dreams. But you…YOU have the chance. And I want to help give you and your family that opportunity.”

I cried and cried—becoming a totally blubbering mess, and I wondered how I would ever pay this person (and the other contributors) back.

“Just promise me,” they said, “I want to remain anonymous and so do the other people who pitched in. Just have a great time and promise you’ll write about it. All of us read your stuff.”

This happened several months ago, but I’ve honestly thought about it every single day. Especially today.

Today, this Wednesday, is a huge day for me. I’m getting scans to see if the last bit of cancer is still in my spine. Tomorrow will be the last time I can get immunotherapy (even though they will continue infusions for my bones for another year and a half). But the max they can do for immunotherapy is two years because any more can cause organ failure and other complications. If I still have cancer today, we will have to try a clinical trial. And doctors have told me over and over that at that point, the game will be set for failure. No more chances. But—by some odd twist of fate, modern medicine, and answered prayers—some of the cancer has started dying in my body. And despite what doctors predicted, I actually have a chance.

On Oct. 30, it will be exactly two years since doctors only gave me two years to live. It’s odd to think that so many miracles have happened since then. Plus, I’ve really begun to live.

I’ve experienced so many amazing things with my family over the last two years. I got to sing the national anthem for a semi-pro baseball game. My memoir got published by a real publisher and became a bestseller. I went skinny-dipping with Mike—even though he seemed a bit worried that I’d get swept away in the current. And now we’re going to Italy this winter, and I might finally be feeling up to the occasion. We have a wheelchair now because cancer ruined my back and part of right leg. Plus my stamina is still so low, and doctors say it always will be since cancer treatments wiped out all the cortisol in my body. But if that’s the price…to live and see my kids grow up, I’m willing to pay it.

So, I will never meet Oprah—which is actually hilarious. But I will get to see Italy if I can just stay the course.

I’m so excited to find out what my scans will show today. I feel like a new day is dawning, and I have a renewed lease on life. Yes, the cancer might still be there. Yes, even if it’s gone there is an 80% chance that it will come back. BUT right now I simply don’t care. I am too busy being happy and loving the moment.

Posted by Crazy Life of a Writing Mom at 6:46 PM