The Penitent Man Will Pass 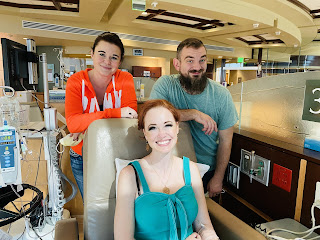 I love Indian Jones so much that I named my youngest daughter, Indiana. But today I can’t shake one of the scenes from my head. Do you remember when Indy crosses that “invisible” bridge? He takes his first step of faith simply talking about how “the penitent man will pass.” 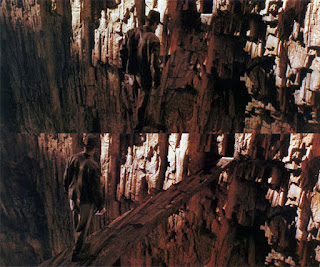 I’ve seen several people “ring the bell.” This means  people are done with cancer treatments. I always thought it meant their cancer was gone, and at first this could feel conflicting. After all, this isn’t some contest where everyone gets a consolation prize. This is life…and everyone knows it’s not fair.
I never thought I’d get to ring the bell. But then I learned that people ring the bell for other reasons too. It might signify that they’ve decided to stop treatments because it’s too much and they’re ready to meet death’s embrace. Or they could stop after doctors have discovered that the medicine is too much for them to withstand. (I came close to that point last year.)
Anyway, today I find myself in a very weird middle ground: cancer purgatory.
Some of the cancer in my body remains, but it’s what the doctors call “stable,” meaning it’s stayed the same size for a very “long” time. (Maybe an easier way to describe that is: “dormant.”) “We never say that people with stage four melanoma are in remission,” an oncologist told me. “Unless you have a freak accident, you still know how you’ll probably die, but we have bought you time. And we’ll be watching you closely so if—and when—it starts growing, we can try other options.”
“Like a clinical trial?”
“Yes.” She nodded.
So, my friend (Kara), Mike and I left that office and trekked to the infusion clinic where I’d have my final treatments. “It’s crazy to think I’ve almost had treatments for two years,” I said somberly. Two long years—the most doctors said my body can take. “We just have to hope and pray that the ‘stable cancer’ won’t keep growing.” Then I paused and glanced at Mike. “I would’ve written my life differently,” I told him. I don’t mean to be irreverent, but I am an author, and this plot line could be skewed as a tragedy. I want to be in an adventure…at the Temple of Doom…with Short Round.
“That’s not the point, Elisa,” Mike said, and I wondered what he meant.
“Elisa…,” Kara interjected, always trying to make things better. “You’re such a good friend. I just wanted you to know.”
We continued on, finally reaching infusions. “No way. You are a way better friend than I am.” Then the emotions of the day overcame me, and I needed to tell her how much her friendship has meant to me. “Remember my wedding day?”
She nodded.
“What you did for me was unreal. You fixed my hair so it stayed in place. You made sure my makeup never smudged. You took shots of Kahlua with me in that barn so I wouldn’t be too scared to walk down the aisle. And you single-handedly made sure I could my vows. It’s just an example of the kind of friend you are. You’re amazing and loyal. You made me feel beautiful…like I was worthwhile.”
She broke out laughing. “I don’t remember doing anything extraordinary,” she said thoughtfully. “It’s funny what sticks out to people…. You know what sticks out about you?”
I shook my head. 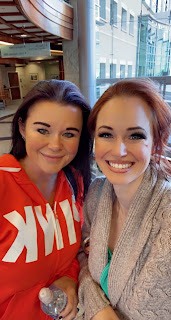 “Your positivity. I never told you this, but last year after I went to treatments with you one time, I realized how negative I’d become at work. I watched you, fighting so much pain…. But you still asked how the nurses were and worried about everyone else. You stayed so damn positive. And I thought, ‘If Elisa can be this positive—with everything she’s going through—I can try too.’”
I bit my lip. “That means so much to me, Kara.” From the corner of my eye, I saw Mike smiling with what might’ve been his I-told-you-so face.
“I started a positivity board at work because of you,” Kara continued.
“Really?!”
“Every day I add something to it for everyone to see. It’s gotten pretty big—and I haven’t taken a recent picture, but here’s one from a few months ago. And it all started with me going to that one treatment with you.” 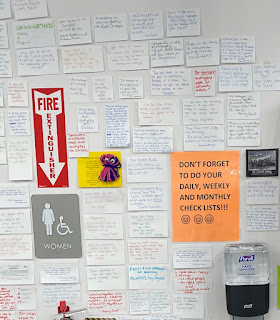 I could hardly believe it. Kara is a big deal, pretty high up at an elite company. It felt hard to comprehend that anything I’d done had impacted her.
“That’s what I meant earlier,” Mike said. “That’s the point of your story. It’s not about how to get better. Or how to not get sick or how to beat cancer. It’s about appreciating what you have, right now.”
So, although I wish I could write that I got to ring the bell because I’m cancer free, that would apparently be too easy.
I’ve decided that Mike “might” be right. (*giggling* because he’ll love reading that line.) The point of my life right now isn’t to show people how to be happy after overcoming hardships. Its not about how much better life is after beating cancer. It’s about finding joy DURING the hard times. It’s about perseverance and remaining happy regardless of what your situation might be. I’ve honestly found so much happiness after getting a terminal diagnosis. I’ve seen love and embraced the good around me.
So…despite living with a ticking time bomb, I can be extremely happy today because I got to ring the bell. I wore my best dress from Goodwill, and I think I might’ve been the most fashionably dressed person to ring the bell this year. 2022 fashion alert! There’s that.
Can you believe I made it through two years of treatments, and I’m still here to tell the tale? Life is a wild ride. I can hardly wait to see what chapter God has written next. Spoiler: He’s one heck of a writer. I’m just hoping for a twist ending. Let’s do this thing!
Posted by Crazy Life of a Writing Mom at 5:29 PM