Too Innocent for this World

“That’s why I believe there’s something after this. I mean, we go someplace after we die,” Trey said.

There’s something quite exceptional about Trey. He’s almost otherworldly. Even as a tiny child he would say extraordinary large words and understand things he shouldn’t. If reincarnation were real, he lived previously as a philosopher. If parallel universes exist, he is the best version of himself. And if anyone is truly innately good, it’s him.

“Trey’s special because he’s the only son you had after Zeke—your first son—died,” a friend once told me. “God gave him to you.”

I remember smiling. “All of my kids are exceptional,” I said.

Trey brought me back to the moment. “Even though you have cancer, and all of these bad things have happened to you, you’ll always believe in the afterlife, huh? Because of what happened to us.”

“You’re talking about Adam?” I asked and he nodded.

Adam. Now there was someone too innocent for this world. I never expected it when we dated at the age of 15, but when he reached his 30s, I began to realize. The man had faced more hardships than Marilyn Monroe, and yet he refused to don armor. I cried hearing about some of the things he’d experienced. My stomach twisted in knots because the hardships were one thing, but the way he stayed resolutely unchanged mystified me. Instead of getting angry with someone who almost killed him…instead of getting bitter with his bride who got pregnant with someone else’s child…instead of letting the world destroy him, he fiercely loved everyone. And then…

We always stayed in touch, but grew a closer friendship after my divorce. It felt devastating when I realized he’d gotten back into drugs.

“I can’t have that around my kids,” I said. “We’ll talk again when you’re sober.”

But we never talked again. And several months later I received a message from a mutual friend. “Did you hear about Adam?”

We all took it hard, especially Trey who’d called him “Uncle Adam.”

Months and months passed. We didn’t talk about Adam much. I didn’t want to upset the kids. Then, one day I walked into my bedroom and felt like Adam waited there. I honestly thought I was losing it. And even when I sat at the edge of the bed, it somehow seemed like Adam sat next to me. You know how you feel around different people: the smell of their perfume or cologne, how they make you feel about yourself, the feeling you get about them?

I sat there for a minute, then walked out of my room and into the hallway. Trey stepped from the bathroom at that moment. He was only 5 or 6 at the time; a tiny guy with a very serious attitude. “Mama,” he said, “something weird just happened.”

“Oh, yeah?” I asked, thinking of my own strange experience from moments before.

“Yeah,” Trey said. “Uncle Adam came and said ‘goodbye.’ He told me he was sorry he had to leave early. I guess he just wanted me to know.”

I stood in shock. Dumbfounded….

It’s been so many years since this happened, but every once in a while Trey still talks about it.

“So that’s why you believe in an afterlife?” I asked Trey.

“Yeah, and with you being sick, it’s helped me a lot. It’s nice to have that memory to hold on to.”

“For me too,” I said. And whether it was coincidence, String Theory at its finest, or something divine, I figure it doesn’t matter. That moment still gives my son peace. And for me, it keeps my sense of wonder well and alive.

Happy “late” birthday, Adam. You became like a brother to me, and I’ll always miss you. Hey, if you get a chance can you tell Zeke hello for me?

It’s kind of nice thinking Uncle Adam is looking out for him in the Great Beyond. 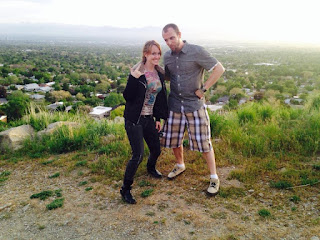 Posted by Crazy Life of a Writing Mom at 7:24 PM