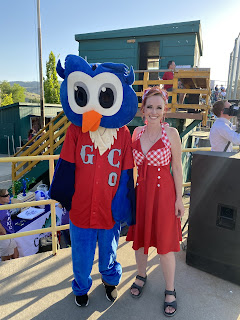 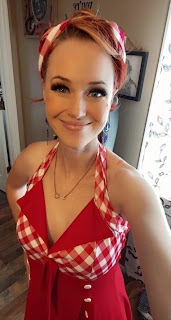 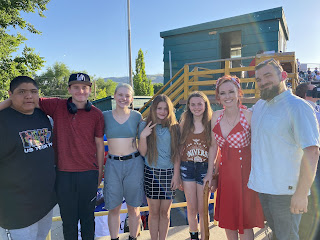 “Would you like to sing the national anthem at a semi-pro baseball game?” she asked, and it felt as if the woman had reached into my soul and found one of my deepest desires. Since doctors only gave me two years to live (although now they’re saying I have much longer) I’ve been thinking about my bucket list. The three biggest items have been singing the national anthem at a baseball game, bagging an actual deer during a hunting trip, and going to Italy.

I’ve wanted this since I can remember. At the age of five, I sang the lyrics to the national anthem so many times my mom actually woke up singing them one morning. “Wow,” she said, “I must be hearing this a lot.” And we both laughed.

But my stamina isn’t what it used to be, and I honestly worried, wondering if I could actually do this. So, I dressed up like a pinup girl because if anything says America it’s: apple pie, 1950s cars, baseball, and pinup girls. My kids were so excited to support me and so many friends showed up at the ball park.

I’ll never forget standing under the stadium lights on “home.” Thank God I brought my cane because it felt like my sole friend out there, so trusty and reliable. But then, as I heard other songs playing on the speakers, I actually forgot the melody to the “Star-Spangled Banner”! To make it worse, I couldn’t even remember the key I needed to sing in—a cappella.

I started shaking and felt like I could fall over. Then the announcer walked up and handed me the microphone. It was my turn. I felt so weak—and dizzy…. But somehow I miraculously remembered the key AND the melody. But after the first verse, I completely forgot the words.

I stared out at everyone: friends, family, throngs of strangers…. My breath caught in my throat. It was such a metaphor for my life—that very moment. It just seems that I try with all my heart, but always have an Anne-of-Green-Gables moment. Things always have a bit of flavor, they’re always memorable, and they are never perfect.

I apologized into the microphone: “Sorry.” I looked out and people cheered, hoping I would have the gumption to continue.

And then somehow, like it always does with life, the melody came back to me. I instantly thought of ice skaters and how when they fall they better pull off a triple axle at the end. That’s when I decided to go for the high note. My family had told me not to try it, but what could I lose at this point? So I sang with everything in me. I still shook a little and held onto my cane even tighter for support, but I actually pulled off the high note—and then an octave above it!

Afterward a well-known local photographer took pictures of me, and a reporter even did a story on me and my will to persevere despite hardship.

I met the owner of the baseball team and got to see so many friends who I haven’t visited with in years! But I have to admit that I cried pretty hard because of my mistake. It wasn’t until I got home that I realized it was a good thing.

“You cried?” my kids asked, shocked.

“But, Mama, you don’t cry about stuff like this. What people will remember is your strong voice and that you actually got out and did this even though you have cancer,” Indy said.

Sky, my 17-year-old, gave me the biggest hug. “Mom, I’m really proud of you.” THAT meant the world to me. So many tears filled my eyes. Just to hear this from my kids had more import than I can describe. We’ve gone through so much since my diagnosis, but it’s really bonded all of us together. No matter how hard things have been, we have all of these memories now to look back on. It’s not the terrible things we’ve gone through that really matter, it’s how we handle them!

Trey cleared his throat. He’s 14, but so serious when he’s been thinking hard about something. “It’s like with everything else,” he said, pausing, “if you have a hard time you just keep going, Mom. You showed everybody out there what you’re really like. Life can be hard…but you don’t let that stop you. None of us should.”

So I sang the national anthem; I paused for what I told the reporter later was “to build intrigue.” “I stopped, looked out at the crowd, and can you believe they actually wanted me to keep going?” But I think this was a great reminder that it is good to keep going. I will always remember this wonderful night. But most of all I’ll remember the amazing things my kids said to me, to cheer me on after the game.