What I CAN Instead …

“I saw you in the wheelchair,” the Delta representative said, “so we’re moving you closer to the front of the plane.”

I’d decided to visit my parents in Arizona right after Halloween, and I’d never expected the airline’s employees to be so nice! Everything went great until after I left the customer service area and waited to board; that’s when I noticed a few younger people studying me with pity. I’m not sure why their prying eyes hurt, but they did.

I called Mike and whispered into the phone. “God made me all wrong,” I said once Mike picked up, but I immediately regretted my words. God doesn’t make mistakes—that’s religion 101. Plus, I probably got melanoma from fake baking or getting burned when I was homeless in Hawaii. Fiddling all night, then blending in with tourists and sleeping on the beach all day had risks. If you slept too hard, when the shade moved, you’d wake up lobster-red. Nope. Melanoma wasn’t God’s fault; it was mine.

But honestly, it’s true that most days I do feel like there’s something wrong with me. Maybe we all feel like that sometimes. Maybe I’ve just felt that way more than most. I’ve had people tell me I’m a one-upper, so contrary I just have to go against everyone, or an acquired taste. But I don’t want to be someone who has to grow on you like fungus…. Anyway.

It’s hard having cancer and wondering about all this beyond reason … Who am I really? A collection of my perception and what other people think about me? What impression AM I leaving behind? And then it instantly feels as if everything that’s wrong with me is manifesting in my body so everybody can see it on the outside.

This isn’t a pity-me post—trust me, that’s the last thing I want. These are just issues I’m dealing with probably because of the cancer.

It’s hard being unable to do most things by myself. I can’t reach up high or climb on counters when I need the largest dish. I can’t even sleep through the whole night anymore because some part of my body inevitably starts burning with pain.

People ask me when I’ll be able to walk “normal” again. The answers probably never. I’ve also had friends ask when the swelling in my face will go away. It’s called moon face—something that happens when you take steroids. My face will thin out in days or months. I. Don’t. Know. But honestly I think right now that’s the least of my concerns. And that’s what Mike told me before I boarded the plane to go see my parents right after Halloween.

The interesting thing is that when I sat down on the plane an overwhelming peace fell on me. And it grew as a stranger sat down next to me. We immediately started visiting. Somehow I ended up telling him about the cancer, but this stranger didn’t judge me or show an overt amount of sympathy … or sadness or anything bad, really. He just treated me like a normal person. And then I swear we talked about everything: religion, philosophy, family, and what it’s like to live in Idaho.

“They changed my seat at the last minute,” he said.

“Mine too!” I replied. And then I discovered he’s from the same small town where I live. And he only lives a couple miles from us! And our kids are the same ages—and go to the same exact schools!

Despite only just meeting, I said this was a Godwink, we exchanged information, and decided it would be fun to go on a double date. And when I walked off the plane, I swear I stood a little straighter. It wasn’t because I felt better, physically, but because someone had treated me normally. This stranger gave me the courage to move on from the moment of self-pity and sadness because  the point is that although I don’t know why I’m going through this, I can still overcome and be positive and happy throughout the hardship. After all, I’m still alive! I’m still able to move around! And I can live life to the fullest—to my own capabilities! It’s time for me to STOP measuring myself against everyone else’s view of me. And measure myself against what I am capable of, what I want, and what I CAN do about it!

We ended up going out—not on a double but—on a triple date a few weeks later. Can you believe the man on the airplane actually knows someone who I’ve been good friends with! I guess they ended up talking about me while visiting at church and were so surprised to discover they have a mutual friend.

Anyway, I loved every minute: the conversation, the laughter … the joy. But most of all I loved that all of them treated me the same way the man had on the plane. And I realized that regardless of how people treat me I need to always fight to find that inner joy. Some days can be a battle – because joy is not like happiness (that just comes and goes), no, Joy is something you have to fight for. Joy is something you CHOOSE. So that’s what I’m going to do. Today, I choose joy.

(A pic of my second-favorite wig lol.) 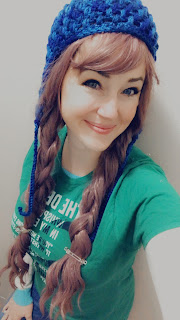 Posted by Crazy Life of a Writing Mom at 2:28 AM