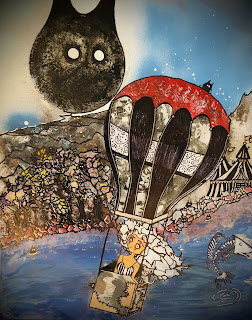 I want to be the “cool” mom, and apparently—with Halloween barely in the rear view mirror—my youngest kids think that awesome moms watch scary shows and are a little “edgy.”
“I can be edgy!” I told my teenage boy.
“Ummm…no,” he said. “You can’t. Even Abby is edgier than you.” Side note: The kids think Abby—our dog—is God’s gift to humanity. She gets credit for everything. I can make brownies, and she somehow gets thanked for it. I’ll do laundry—and she gets praised! I’ll vacuum—and SHE gets a treat. Yet, she doesn’t even have hands!
So, vowing to upstage the dog, I decided to paint something VERY edgy. “My painting will be terrifying—and awesome,” I told my kids.
Trey laughed. “Yeah, right.”
“So, what do I get if I succeed?
“I’ll play the drums for you,” he said.
“You play the drums for me—and practically the entire neighborhood {they’re so loud} every day!”
He smirked. “All right, if it’s ACTUALLY scary, I’ll tell everyone that you’re…the toughest,” he whispered, “coolest mom around. I’ll even say that…you’re better…than Abby.”
I gasped. Coming from Trey THAT is the ultimate compliment.
This weekend I took on the incredible, unsurpassable Herculean task of impressing my children. I had so many great ideas: scary man in the moon; a creepy tree with a face; a girl with pink eyes (because if you’ve had children pink eye IS not fun); the list went on.
Anyway, in the end, I used several of the ideas and painted a circus girl with pink eyes. She looked terrified in a hot air balloon as she ran from a band of killer cats. I put cats on the girl’s hot air balloon and in the water chasing her. I even made the moon look like a cat.
Anyway, the big reveal was this morning, and I could hardly wait to show my children the terrifying painting.
After their breakfast, I clutched my creation facing away from them. “Are you ready? This is the MOST terrifying, the MOST thrilling, the most terrible thing you have ever seen!” And I slowly turned it toward them with so much anticipation!
“That…is not scary—at all!” My boy said in a monotone. And then both Trey and Indy broke out laughing so hard I worried for their health. Then they started saying how I will never be edgy no matter how hard I try.
“What?! But this IS awesome,” I blurted. Yet, they didn’t listen—too busy telling our traitorous dog that she’s amazing and she’s the edgiest and the coolest. And how she can probably paint really well!
After the kids left for school, I sat on the couch and giggled. I started painting after being diagnosed with cancer, and now it’s given me so much to look forward to. I have a mermaid painting that I alter once a week; my kids never know what might change (one week she went from having closed eyes to opening them; another week she grew fins!) We’re also putting a poster-board on the wall that each of us have to add something to every time we leave the house—it’ll be epic!
So, I stared at my “scary painting,” the latest addition to this painting adventure. It has 22 cats hidden in it. Maybe I’ll ask my kids if they can find all of the cats. If they can’t, then they better tell me I’m cooler than the dog. This’ll be awesome! I just know they won’t find them all!
Posted by Crazy Life of a Writing Mom at 3:21 PM