Appreciating What We Have

“And we can run together each morning. And maybe even get in a little rock climbing.”

I could tell that the two ladies were just a little older than me, yet they could do so much more. I finally arrived at the front of the line. My back and legs ached so much that my knees had begun shaking, but something completely unseen hurt much more. “I requested a wheelchair,” I told the woman behind the ticket counter. “There’s just no way I can walk through the airport anymore.” Why did I feel the need to justify myself to this woman?

As she printed my boarding pass I thought of the two ladies who’d been in front of me and how they can run and dance and rock climb. Tears began filling my eyes because I missed all of that so much. I just wish that the last time I’d done everything I would’ve appreciated it with due credit. But now all of it is just a memory.

“Do you see that man sitting in a wheelchair over there?” the lady asked after a while.

I looked and spotted a man who slightly resembled Mr. Potter from “It’s a Wonderful Life.” He sat grumpily, next to all of the other wheelchairs.

“Just go sit in a wheelchair by him, and someone will be with both of you shortly.” Then, after I gave her my luggage, she paged someone and motioned for me to go to “Mr. Potter.”

Mr. Potter looked like his namesake for a reason. I tried being social, but his drab countenance could’ve killed even the most chipper angel’s spirit. “Why are you in a wheelchair?” he asked accusatorially. “And why do you walk all hunched over?”

“I’ve actually been walking much better. I guess it gets worse when I’m tired. Dragging my luggage from the parking was rough.”

“Maybe you shouldn’t pack so god-d*mn much,” he said.

“Fine,” I replied. “I have stage four cancer. Why are YOU in a wheelchair.”

“I have cancer too. It’s d*mn near eaten all of me now.” I spied scabs on his arms and legs, something I’ve come to see a lot of at the cancer center. I’ve even had some myself after itching from treatments or medications.

“I used to be able to do so many things. I looked years younger….” After saying the words, he glanced around almost hungrily at all of the healthy people who scurried around us. “Bet someone else deserves this more than I do.”

We stayed quiet for a couple of minutes. “Has anyone helped you?” a woman came and asked. She spoke so slowly and loudly, as if we were mentally handicapped.

“A woman at the ticket counter paged someone, but that was quite a while ago,” I said so fast that I’d hoped she’d realize we were mentally capable. “Can you call someone just in case?”

So she did. And when she walked away, Mr. Potter couldn’t say enough bad about her. “You know people are just nice because we have cancer. That’s the only reason. We make them feel better about themselves.”

My mouth dropped. “Sir, I find your outlook on life…not to be my favorite. I’ve ALWAYS expected the best from people. Now I get to see it almost every day. People find out I have cancer, and they rise to the occasion. I’ve seen the kind of generosity that’s written about in books.”

I couldn’t believe I’d said it. And unfortunately, the man—who was quite a bit older than me—got the reference. “You’re in need of a wheelchair. What can you find to be ‘glad’ about that?”

“Because it reminds me…” I paused. “Even though there’s a lot I can’t do, being in a wheelchair reminds me of the things I can be grateful for!”

“I just started painting. I never would’ve done that if I didn’t have cancer. And now my kids have been catapulted from being cranky teenagers to being grateful young adults.”

Two workers walked up together at that point. Just before they could wheel us to our separate destinations, the man turned to me. “Did I really…remind you of Mr. Potter?”

“Yes,” I said. And as the young man wheeled me away I thought of how important it is to focus on what I can do instead of what I can’t. I hope I gave Mr. Potter the wake-up call he needed—that’s what he inadvertently did for me. 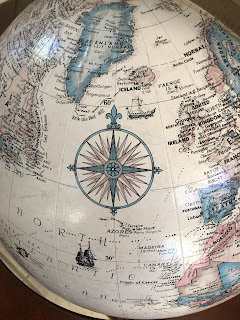 Posted by Crazy Life of a Writing Mom at 8:22 PM