A Beacon in the Darkness

I’ve honestly had points during this journey when I thought I would never get used to things, my life would never be “okay” again—and I would never survive this terminal diagnosis.

In fact, I’ve had numerous dreams about floating in a rowboat during a harrowing storm. I’m crying out to God, not asking Him why, but simply asking for Him to either end the storm or to stop the suffering. In a couple of these dreams, the storm finally does abate only for me to end up on the river Styx, constantly paddling away from the ferryman and smacking away bony hands that try to climb into my boat from the river of the dead. Of course, I look into my hand and there’s no coin for passage, because I’ll be “damned” if I won’t make my own way even up until the end.

I thought about all of this over a week and a half ago. Two of my favorite people in the whole world brought me to see a lighthouse. I’ve never seen an actual lighthouse in person, and it completely transfixed me.

“It’s saved a multitude of ships during storms,” I heard an old man say as he passed us on the walkway.

I scoffed and stared at the unimpressive building again. It didn’t look newsworthy, but that’s what—I decided—made it so amazing. A layman could deem it an old, irrelevant building. Instead, it tells a story…of life.

You see, there have been so many storms I’ve experienced throughout my battle with cancer. My initial diagnosis came in 2018, but it didn’t turn to stage four until 2020. Yet, I have seen the strangest beacons at the most fortuitous times. These things have carried me through the storms these last four years.

The next day, before we flew out from Seattle, Mike decided to surprise me. “We’re driving somewhere before we leave!” And that giver actually brought me to see another lighthouse. I still can’t walk very far because of the extreme pain and fatigue, but I was able to traverse a small portion of beautifully lush forest before we reached a different lighthouse from days before.

I gingerly sat on a piece of driftwood, and then just rested, facing the wind. It rippled through my hair and forced me to take out my barrettes. It was the most beautifully, freeing feeling, just being next to that lighthouse on the windy beach.

“I’ve gotten a few strange messages from people lately. They say I’m proof that God doesn’t exist. Because why would God do something like this to me.” My voice faltered. “I’m not religious, but I do love God with all of my heart. Why would my journey bring people further away from God? Even if I do die, death is a part of life. When will people stop getting mad at God for something that was part of the deal anyway? I have peace that there’s a plan. When I’m supposed to die, it’ll be my time.”

Mike thought really hard and stared out at the ocean. He doesn’t believe in God per se, but he’s awfully supportive of people believing what makes sense to them. “Elisa, if they stopped believing after hearing your story…well, it isn’t about you. They’re placing their doubt on you. That’s a burden you don’t need to carry.”

I closed my eyes and faced the wind again. I pretended that lighthouse was shining right into me, guiding me in the storm. In my imagination the light went through me, leading me to be the person I’m meant to be without regrets, burdens, or even sadness over cancer and doubt.

I heard some people approaching because they started screaming excitedly. Mike and I followed their gazes to see a whole pod of orcas jumping and dancing in the waves right in front of us. “Orcas!” I squealed. “They’re REAL orcas. This is the best. Day. Ever.”

I hugged Mike so hard, and he looked down at me instead of the magnificent fish in the ocean. “You are so darling,” he said.

“But the orcas are my beacon for today!” I no longer thought about the messages I received from people who supposedly lost faith because of my journey. I didn’t worry anymore about how I have to take 18 pills every single day because of everything cancer and treatments have done to me. In that moment, all of this seemed incredibly doable. Whether I’m magically healed someday or have to keep fighting until my real journey on the Styx, I guess I’ll just keep looking for little beacons every day.

It’s like God’s lighthouse, keeping me strong, and always leading me home. Those are the miracles that make life shine. 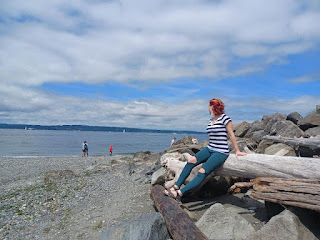