Four Hawks and a Reminder

“You can keep the feather or release into the wind with a prayer. It will find the Grandfathers.” Mato-Uste had given me the feather, but every time I tried releasing it, the winds brought it back.

“Maybe the Grandfathers are rejecting my prayer. Maybe God is rejecting my prayer….” I’d honestly begun wondering if cancer really is a punishment for sins I’ve committed in the past. I’ve definitely done some bad things, but what makes my “bad” acts worse is that I genuinely knew better.

A bit concerned, I brought the feather home from the cliffs of Arizona and placed it safely on my desk. Mato-Uste had smiled while telling me about the feather. “The Grandfathers are watching out for you, Elisa. That is why the feather stayed.”

Some strange things happened in the months that followed. My cancer progressed and the doctors prescribed more radiation. That’s around the time a hawk showed up in my backyard. He’d stare at me while I sat working. The two of us would gauge one another: I’d study his beauty and I’m unsure what he thought of me.

I underwent yet another round of radiation along with grueling sets of immunotherapy that made me lose over 15 pounds. My liver began failing after that.

“The treatments are trying to kill the cancer and your liver,” the doctor said as I sat in the hospital, enduring steroids and more testing. And the whole time I wondered how my family had handled the news. Maybe the hawk looked after them while I could not.

After being released from the hospital, the doctors halted all treatments. “You need your liver,” one specialist said. “We can’t continue treatments unless your liver heals. Even then, it will be a balancing act. Unfortunately you’re living through a very uncertain time right now.”

When I got home, I didn’t see my hawk. Instead the summer heat became almost unbearable with deadly dry winds. That’s when the hawk’s tree fell over. Somehow this made me feel like all hope was lost. The hawk had somehow been a sign that someone looked out for me. But where would he perch now with his favorite branch gone?

I worked facing the deck last week, wondering if I’d ever see my hawk again, when something extraordinary happened. One…then two hawks landed on another branch in my backyard. Then three…and four hawks! 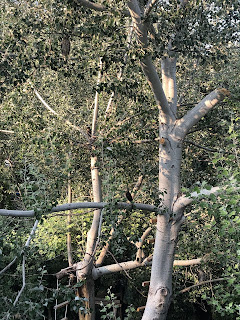 I went outside and instead of flying away, each of them turned to meet my gaze. That night, they began building a huge nest. And once again, they landed on separate branches so they could turn and look at me. We cocked our heads and studied one another. And then after a while, they went back to building.

This might sound completely silly, but those birds gave me so much peace. Whether it’s just because they like our yard or because they are actually looking out for me…I’m grateful they’re here. It’s strange that they came back shortly after I started treatments again when the doctors said they’re hopeful that we’re on the right path for fighting this cancer.

I guess this is just a reminder that sometimes it can seem as if all hope is lost. Your “hawk” might not stick around when you expected or something as stable as a “tree” might come crashing down in your life, but that’s simply leaving room for greater miracles. Some of the best things can happen when we rise from the ashes instead of staying stuck in the mire. Be brave! And look for the possibilities around you. Life, well, it’s a miracle any of us were even born. 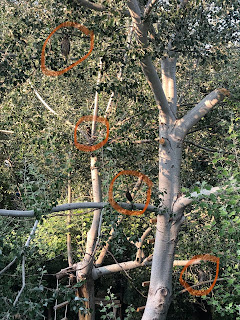 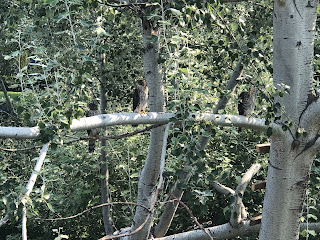 Posted by Crazy Life of a Writing Mom at 4:35 PM